Full Set of Magazine Autographs from 1978 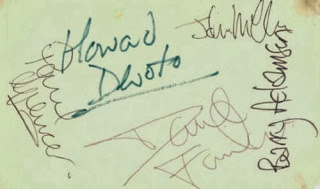 I have just shown the most remarkable restraint by not bidding on a full set of genuine Magazine autographs from Liverpool Eric’s in 1978. Finally sold for £42 on eBay.

The guy selling them provided the following information.

"From 1978, these autographs were signed at a Liverpool Eric's, on the Shot By Both Sides tour. Featuring an autograph by the late, great John McGeogh, along with Howard Devoto, Barry Adamson and Dave Formula as well as Magazine's 2nd drummer Paul Spencer.  I got the band to sign this paper and the autographs have been in my possession and well looked after ever since."
Posted by Gary M Hough at 00:02